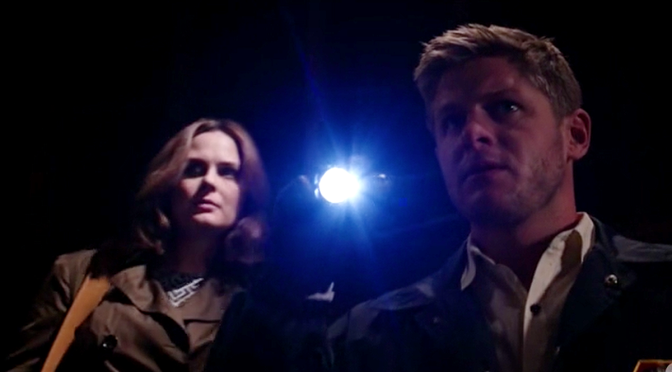 This section of the review is spoiler FREE.

Having been a long time fan of Bones since it first aired in the UK back in 2006, I was a little saddened and even heartbroken to find it was on its final season. Waiting for season 12 to start was horrible because on the one hand you want your favourite show to start back again, but on the other hand, you don’t want to get any closer to it ending.

If you would like to recap on what happened in season 11 you can read about it here and here.

The first episode back was a good one. It carried on straight after the season 11 finale and managed to wrap up that story line pretty well while also opening up doors for future stories. Like we saw at the end of season 11 Zack Addy, played by Eric Millegan, returned to the show. Zack was a main character in seasons 1-3 and guest starred in 4 and 5 before returning at the end of 11 and guest starring this season.

Zack was by far one of my favourite characters of the show and to see him return for the final season was so exciting! Every time we got a new season I prayed he would come back, even just once and now that’s finally happening. If you remember Zack and are also a fan of his, don’t worry, its story in this episode is a good one and you won’t be disappointed at all.

During this episode alone we get to see everyone use their strengths to come together and solve the case. The intern this week is Wendell, and once again he proves to be one of the most lovable characters on the show.

Overall it was an entertaining and strong opening for the season and it seems like the rest is going to follow suit. They did a good job at filling in the blanks (about Zack) for those who might not have remembered, or who might have come into the show late, but they also don’t make it too repetitive for those who remember. It genuinely just made it feel a little nostalgic.

As I said before Zack’s return is something I’ve been waiting for for a while and it did not disappoint. Although I personally never doubted his innocence, I appreciate that they explored the idea that he could be guilty. It broke my heart a little to see so many of the characters, like Jack, truly believing that he could have committed these crimes, but alas they did think he committed that murder all those years ago (remember, Sweets is the only one who knew he was innocent) and the evidence for the current case was pretty strong.

Nonetheless, it was still heartbreaking, especially later on when Brennan had no choice but to admit that it was Zack, that she couldn’t deny the evidence. You could see how broken she was about it, and it didn’t help that you could see the sadness in her beforehand as well, especially when she sat down with Zack in the interrogation room to look over the files. It was nice to see that her love for him wasn’t completely gone and that, although she hadn’t visited him much, she still cared about him and was effected on a deep level by everything going on.

Speaking of relationships with Zack, we see a little from everyone. I was upset to find that Zack felt like he and Booth weren’t friends. If you remember the finale of season 11, you’ll remember that Booth ran into the facility that Zack was staying at and the woman there knew exactly who Booth was and who he was looking for despite Booth only saying “I need to see him.”, and he knew exactly which room was Zack’s. All of this insinuates that Booth visited a few times, or at the very least dropped by to ask after him even if he didn’t physically see Zack. I’d like to think it was down to Booth caring about him, and I’m going to continue to believe that.

With Jack we get to see him go from being angry about the whole situation to thanking Zack for the medical advice, to displaying a whole range of conflicting emotions. Angela was also in a similar situation. Although it hurt to see them leaning towards believing Zack was guilty, it would have been too easy to see all the characters instantly believing that he might not have done it, and it has more of an impact that Jack believes he’s guilty because if you’ve seen old episodes of Bones you know just how close they were. And to see Angela leaning that way too, or not knowing what to think, adds to this dilemma that we, the audience, know Zack and he couldn’t have done these horrible things, right? But perhaps maybe he could.

It was also nice to see Angela and Jack dealing with the idea that the feeling in his legs would most likely never return, and that this time Jack was considerably strong and willing to accept that this was it, there was nothing more they could do and that was just fine because he was happy.

With Cam we don’t see much of a reaction from her, but it did hit me really hard when she was stood outside watching Zack being taken away. The setting (rain), the fact that she felt that she needed to be there, and the way Zack looked out of the window all just added together to make the entire situation even more upsetting.

Then we have Aubrey, Karen Delfs, and Wendell. All three didn’t really know Zack, at least not on a personal level, but that only added to the situation, because we get to see multiple sides, which is why I’m going to talk specifically about Wendell.

Brennan: What about any evidence that could possibly exonerate or convict Dr. Addy?

Wendell: No. I didn’t find any such evidence. Nor was I looking for any. You always taught me to examine the evidence without any preconceived bias. And unless you say otherwise, that is what I’m gonna continue to do.

He spent the entire episode being an absolute sweetheart who just wanted to help everyone, but this particular moment quoted above is the one that struck me hardest. The fact that he chose not to believe that Zack was guilty really warmed my heart. Sure it was easier for him because he wasn’t as personally involved, but he used that to his advantage, because he knew that if everyone didn’t have a personal connection they would re-examine the evidence or look at it with a clear perspective, and like he said, no preconceived bias.

This episode was just a perfect display of why Wendell is my favourite character and I hope that he gets a lot of screen time this final season.

With all this talk about Zack’s potential guilt, I have to say that I’m so happy that he was innocent. I don’t think I would have been okay if they’d gone down the route of him being guilty. It was also amazing to see him finally come to the realisation that he could never kill someone and that, once he revealed to Booth and Brennan that he didn’t commit any murder, Booth jumped in and said he believed Zack. Hopefully they can prove that Zack is innocent of all murder charges because it would be wonderful to see him have a happy end considering this is the final season.

One thing I really did appreciate was the small inclusion that Karen could have been the killer. For a split second I thought she was, and then suddenly things got really intense when she was left alone with Brennan. Everything got darker and even Brennan started to suspect, it really did seem like the perfect choice and for a hot minute they let you believe that she might be behind it all, only to then reveal that no, she’s definitely not behind it. In a way I’m glad, especially because for once it wasn’t the most obvious choice.

Honestly, the most important thing about this episode was the relationships between all the characters, and how those made the episode more emotional and opened up the door for great story lines in the rest of the season.

They handled the case well and found the perfect balance. It had a decent amount of attention, it is a crime show after all, but that time was filtered out and spread among everything else that was going on. They used the case to further character’s stories and to create scenarios in which these characters and their relationships could be displayed. For example, we get to see Brennan and Wendell interact because of the case, we also get to see Cam and Wendell interact. The case was used not only to continue the story we left at the end of season 11, but also as an excuse, a reason, to explore so much more.

And before this review gets too long, I’m going to leave it here. I do have to say really quickly though, that I appreciated the glimpse of the Gormogon sculpture. Seen in the first picture of this post.

Overall this episode was amazing. I spent the whole time being fully immersed and not wanting it to end. If the rest of the season goes as well as this first episode, then it’s going to be a great final season to end the show on. Let’s just hope they can keep it up.