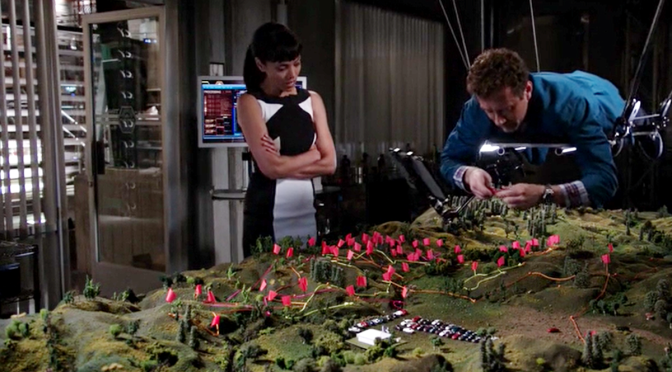 This week’s episode of Bones was more lighthearted than the first episode of the season. In this episode we got to explore some artificial intelligence, and it was Brennan’s birthday.

This was a pretty incredible episode. In fact, it’s probably one of my favourites of all time. It was surprisingly funny, which was much needed after the intensity of last week’s episode.

Starting with the A.I. side of things, the case of the week was actually super interesting. AMI, the robot we meet, was oddly adorable and I would honestly purchase one if I could. I love how she was integrated into the case and we got to see her interact with Booth and Brennan, even though she ended up not being the murder weapon/killer.

A lot of the humour from the episode did come from the interactions with AMI, but also from Hodgins. This was very much his episode in a way. From the moment his eyebrow got accidentally shaved off at the crime scene I knew it was going to be a great and funny episode.

There was a lot of individual screen time for Hodgins, and although a lot of it was spent on the fact he was missing an eyebrow, he really shone this episode. I particularly liked his scenes with Daisy (who was the intern of the week), and how he spoke about coming to terms with the fact that he’ll never walk again. Hodgin’s journey has been a great one and I can’t wait to see where it goes by the end of the season/show.

Cam: Hodgins? Wow. Or should I say Peter Pan? Looks like you made major progress on your map.
[…]
Hodgins: You mind grabbing that there for me, Tinker Bell?

Now going back to the other big thing of the episode, Brennan’s birthday! She spends most of the episode planning her own surprise party which is very fitting for her character. She also has some questionable moments when it comes to Angela winning the MacArthur grant and Daisy applying for a job. She acts like Brennan sometimes does, but mostly how she used to. She seems unaware that her words are actually quite mean and unaware that she should be happy and supportive of her friends.

But oh no, this is where Brennan, after several seasons/years of character development, comes in. Now it wasn’t too out of character that she was blunt, but Brennan in most recent seasons tends to be more aware that she could have hurt someone’s feelings and is quicker to apologise. The fact that she continued to be blunt and even denying her negativity was the out of character, but it turns out it was all an act because of her surprise party.

The fact that she chose to use that time to celebrate the people she loves as opposed to just herself was so beautiful and perfectly displays her as a character. She’s still very much the character you fall in love with in season one, but she’s developed a lot over the seasons. It was a nice touch that she nominated Angela for the award and suggested Daisy for the job. I really don’t see early seasons Brennan going to all this trouble for her friends, that’s not to say she wouldn’t have cared, but it just never would have crossed her mind. It most likely would have been suggested to her or brought to her attention.

Overall this episode was just really heartwarming and lovely to watch. You always get this overwhelming sense of family with Bones and you could really feel it this episode. One thing I’m curious about for the rest of season is Max. He dropped what looked like a hospital wristband, and I’m curious to know if it’s his and if so what’s wrong with him? With it being the last season I expect some drama, and possibly heartache, to be in there, but I really hope everything ends well for Max.