Once again we go back in time to when Elizabeth was a child which was incredibly interesting. The exploration that Elizabeth felt she hadn’t been taught enough and that her education wasn’t good enough was really well done, and it was interesting to see her wanting to take the opportunity now because she felt it was only right that she have more variety in terms of her education.

I really loved the little detail of Elizabeth nervously touching her pearls when trying to explain why she wants a tutor. You can really tell how much she wants to further her education, but how uninformed she is and even how embarrassed she is. Her anger at having been denied an education was well just, and it was pleasant to watch her fight against it.

We are also treated to another visit from Churchill during one of his weekly visits to the palace. With this being a show based on history it’s always interesting when famous events are explored. In this episode we see the Soviet Union detonate their first hydrogen bomb and the effects it has.

Elizabeth’s journey to become more intelligent was really pleasant to watch, especially as she seemed to come to realise that she does deserve a regular education, but the one she got was also really helpful too. The show tends to show her finding a balance between things, it just sometimes takes a while to get to that point.

It was a genuine pleasure to see Elizabeth stand up to being lied to, and instead of sitting back and keeping her mouth shut, she spoke out. The way she handled the entire situation was so well done. The way she changed her tone of voice and how she said what she needed to when it came to Churchill.

Right from the start of this episode you could tell that it was going to be a more serious one and that it wasn’t going to be very happy by the end. Although there are light-hearted moments they’re rare and don’t last for very long. This episode there was a constant theme of things shifting and changing. We saw staff members change, Churchill’s health get worse, and just the overall mood and tone of the episode get gloomier as it went, among other things. 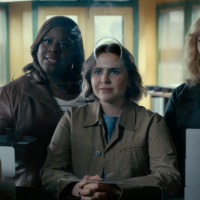