This episode we pick up with Michael, Lincoln, Sucre, and Whip who are all floating on a lifeboat somewhere in the Medeteranian. I appreciate that the show didn’t spend too much time on how they deal with that situation. Instead, we just see that a passing boat notices them and they’re rescued.

Through this episode, we get a lot of flashbacks to Michael’s time working with Jacob. It’s interesting to see. Jacob is a very charismatic which kind of draws you to him. He might be the bad guy, but there’s something very intriguing about him. The more interesting thing is when you see him interact with Michael because you know that Michael is much smarter and, because this is Prison Break, is most likely several steps ahead.

We also get more insight into Jacob’s other life, the one he’s been hiding from Sara. We see his secret room and all the power he has. It was very nice to experience the Poseidon side of Jacob, even though we knew it was him, for a while, it did feel like two separate people and now we get to see them merge completely.

Throughout, we see a chase between Jacob and Michael. One component is Mike’s map. It’s a shame that the one Michael saw was fake, but it’s clear that Michael wasn’t only impressed with the art, but how it was a map, something we know Mike is capable of (plus, he really is a pretty good artist). He really is like his father, and we’ve seen in the past that he’s much like Sara too.

Besides the map, we also have Michael knowing that the texts aren’t from Sara, as well as moments like when Michael leaves his phone on the plan for Van Gogh and A&W to follow (I also love that shot of Sucre leaving the plane with a smile on his face!). It’s a constant back and forth so that we, the audience, are never fully sure who is in the lead.

Speaking of the plane, it was interesting that they used the men chasing Lincoln at the beginning of the series to get back into the U.S. They didn’t really amount to much back then so it was great to see them be used more. I also loved how C-Note and Sheba pretended to be DEA agents in order to spook the men from killing Lincoln. It’s a shame that C-Note doesn’t stick around, but we have seen him a lot this season, and it was nice to see Sheba take the action this time around.

We finally get more information on why Van Gogh and A&W are involved. The former is starting to have doubts about what they’re doing which were great to see. We’ve slowly come closer to them so it makes sense that the show would pull something like this.

Elsewhere, we see Michael, Lincoln, and Sheba looking for Sara. First, they try the house which of course comes up empty, it’s too easy. This leads them to find Jacob. The way they use Van Gogh and A&W to do it was fantastic and I love that Jacob knew exactly what they were doing. The best part comes when he thinks he’s being followed and he pulls the gun on Sheba. We, of course, knew she might come face to face with him because they mention that he wouldn’t know her, however, this was not what I was expecting, although I was pleasantly surprised.

This is where Mike’s map comes into play and we finally get to where Sara and Mike are being kept. I wondered what was happening when Mike goes into the other room and looks horrified. I admittedly never guessed that it would be A&W, even if I did think Mike leaving the map was suspicious because how would he know that Michael was coming for them? However, I was expecting something more like Sara being injured or something, but what we got was so much better.

Of course, we get the reveal when Michael shows up. The meeting between him and Mike was cute, although short. When Mike tries to warn him that’s when all the red flags went up but there’s no time to prepare as A&W enters the room. I did love that Michael hugged Mike close to him as it happened. Having seen the finale, the ending with the gunshot is a bit misleading, however, for the drama of it, I can understand the editing choice.

Now, while all of this is going on, we have Whip who is off to find something at the coordinates that Michael gave him. This leads him out into the water where he finds a jar of blood, you read that right, but that’s not the best part. The best part was Whip meeting T-Bag. They’ve handled the latter’s story so well this season. They’ve shown that he’s a changed man who doesn’t want to do anything bad ever again unless it’s for the greater good, however, the show never forces you to think of him as a good man or forgive him for his past wrong doings. I appreciate that they don’t try to excuse what he’s done in the past, but simply to show that who he is now is different. Now, I might have screamed when we found out that Whip and T-Bag were related. It wasn’t too much of a shock, it felt natural and made sense, but it was so exciting to see nonetheless!

For the penultimate episode, this one was pretty good and it already started to tie up some loose ends in time for the finale. 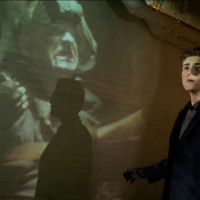