Note: This review is a little shorter than usual due to a backlog of posts.

It’s super interesting that we’re seeing Jefferson suffer from headaches when Anissa used to but doesn’t seem to be having them anymore. If they’re anything alike in terms of their powers then perhaps Jefferson simply has to find a way to lessen the headaches because for Anissa, using her powers lessened them, however, it seems the more he uses his powers, the more painful the headaches become. They even make him pass out, so does that mean Anissa’s headaches are going to come back/get worse?

We also see Anissa look into her past and now she’s on to Tobias Whale which could only prove dangerous. We’re getting even closer to the fully fledged superhero which is exciting. I like this version of her outfit although I’m assuming it’s probably going to change a little over time. Jefferson didn’t have the costume he has now when he first started, so hopefully, we see Anissa’s costume grow over time on screen.

Elsewhere in the Pierce family, there’s Jennifer! She might not have powers but she certainly knows how to handle herself. I don’t blame her for defending herself against those girls, especially after how they spoke about Khalil. One amazing thing about Black Lightning is that so far it doesn’t seem like anyone is going to get left behind. Even though characters like Jennifer, Lynn, Grace, and so on, don’t have superpowers, they’re still a huge part of the story which I love. Black Lightning has fantastic characters and it’s nice to see them all get a spotlight every once in a while.

Again, Tobias takes a back seat for me but I did actually feel something this episode. As more episodes air I’ll probably enjoy his scenes more and more. I do think his sister, Tori, is a lot more interesting though and really helped his scenes. Hopefully, with the two of them teaming up and the everything developing more and more as episodes go on, I think Tobias is going to become a much more interesting character. 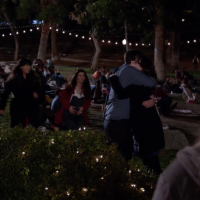