This episode was a little more contained, it focused on Dutch and Jaqobis with a bit of Zeph as well. At the end of the previous episode, we found out that D’avin was taking Jaq to his home planet and the Hullen were following close behind.

We start episode 8 with Dutch and Johnny arriving at his home planet. She stays aboard Lucy while he goes down to find D’avin and Jaq. However, he only just gets there just in time to grab Jaq before he’s seen by the Hullen.

I liked that we skipped straight to them arriving, rather than seeing the journey of them trying to get there in time. It’s also established early on that D’avin is only going there to pick up something (money) so he can get Jaq far away. It was actually pretty hilarious that Jaq questioned if being safe was always that boring.

Seeing all the Jaqobis together was really entertaining and a little strange. Naturally, Johnny and D’avin try to keep the full truth about Jaq and what is going on with them from their father. All of that made it even more hilarious when Johnny does actually tell his dad the truth only to be dismissed.

Seeing Johnny and D’avin team up against their father was really heartwarming. It had been mentioned time and time again throughout the show’s lifespan that D’avin is very protective of his little brother and would do absolutely anything to keep him safe. It’s been the case their entire life and we really saw it in this episode. The way D’avin stands up to their father and is willing to get in between him and Johnny if need be, gave us a visual insight into what their childhood was like. The only difference is their dad isn’t drunk and they’re no longer kids.

We also see it in the form of D’avin (and Johnny) protecting Jaq from their father. The best part is that standing up to him didn’t really involve any physical violence. They mostly warned him with their words. The occasional eye roll and negative comments directed at him under their breath were a nice touch too.

Their dad showed that he hadn’t changed even though he had (presumably) stopped drinking. It was a quick fire way to get Johnny and D’avin to bond again and go back to how they used to be. Being around their dad again, back in their old home, also helped them to face things from their past. Johnny finally found out the real reason why D’avin left when they were kids and he also got to thank him for everything he did.

While all of this is going on, Dutch is up on Lucy talking to a hologram of Zeph. They’re trying to figure out the contents of the cannister that Dutch obtained in the previous episode. Part of their plan involves flying super close to a sun and, despite Zeph’s protests, Dutch goes ahead with it.

She gets Lucy to switch to manual controls and then mutes Zeph so she can’t keep objecting. The plan does allow them to analyse the contents of the canister although Dutch does lose consciousness from the force of moving so fast. It was really cool how Zeph used the power of the hologram to set off the alarms and wake Dutch up.

All of their scenes leading up to and during the plan were really entertaining, but the scenes that followed were something different. We had Zeph and Dutch exchange some much-needed advice. Zeph finally opens up about Pip and reveals how bad things really are and Dutch, although not so explicitly, opens up too. I loved that Dutch reassured Zeph, saying that she could kick the problem with Pip in the ass with science and that Zeph tells Dutch that she’s allowed to let in a little bit of light every once in a while.

It was even more important because this exchange of advice comes after Zeph yells at Dutch for not just risking her life but pushing people away.

[Hannah John-Kamen as Dutch, and Kelly McCormack as Zeph| Syfy/Space]

Something I really appreciate about Killjoys is that when two characters fall out it’s never dragged out. It’s almost always fixed by the end of the next episode and if it does last longer than that it’s for good reason and usually adds to the plot and/or the character development. In this episode, we saw a quick but meaningful reunion between Johnny and D’avin, and by the end we also got one between D’avin and Dutch.

After the advice Zeph gave her, Dutch opens up to D’avin about how him leaving made her feel. They both promise that they haven’t given up on ‘them’ and not only was it great that their falling out didn’t last too long but that they seem to have made some progress in their relationship. Seeing them laugh and kiss and be happy made my heart so happy, until it was ruined at least.

At the end of the episode, Dutch falls to the floor in pain and mentions that it burns. As D’avin unzips her, we see something being etched into her back. 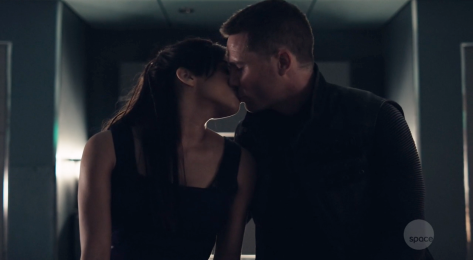 One thought on “Killjoys Season 4 Episode 8: ‘It Takes a Pillage’ Review”