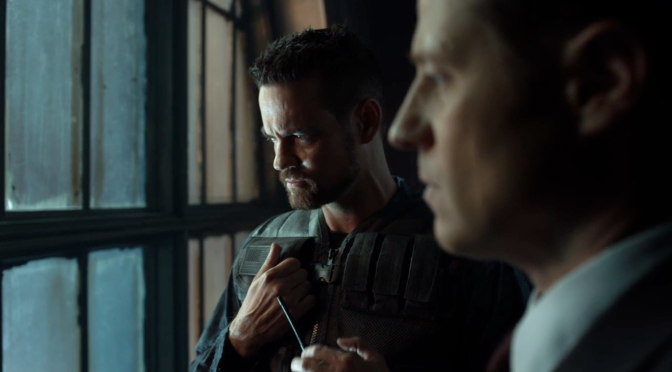 After last week’s episode, Jim takes Barbara’s lead and, along with Harvey, he goes to see the man who sold the RPG that blew up Haven but he brings out various men with weapons. They seem to be surrounded until Eduardo Dorrance (aka Bane, played by Shane West) and his team come crashing through the window and take everyone out, saving Jim and Harvey. It seems that Jim and Eduardo served together, and the latter has been sent in to help restore order to Gotham and then get help for those who need it. I have been looking forward to seeing Shane West on my screen again, especially in this, ever since it was announced and boy, it didn’t disappoint.

The group quickly discover that Ed has purchased two RPGs. Jim, Eduardo, and some of the other men plan to go and find him while Harvey helps the other soldiers get set up at the GCPD. I loved the talk between Harvey and Jim before they split up. Hearing that Harvey is one of the best cops and the most likely to take over if things go sideways for Jim was a real treat. Harvey has had some of the best character development in the show and he deserves a lot more credit and respect than he normally gets.

When we first see Ed this episode, he is listening over his old recordings and scribbling notes down as he tries to figure out what’s been going on with him. He doesn’t understand how a part of himself could kill all of those people including all of the children. I’ve always thought this about Ed. Sure he’s killed people in the past but he’s never been capable of cold-blooded murder. Even if we don’t agree with his reasoning, he always does have a reason to kill the people he does. Kristen is maybe the exception but I would argue that her death was partly an accident, an event gone wrong, at the very least he never set out to kill her.

Jim, Eduardo, and the others show up to arrest Ed but he manages to talk to Jim beforehand, pointing out that he’s only ever hurt people if they hurt him first. I absolutely adore that Jim hesitated. He and Ed are probably my favourite duo in the whole of Gotham. I love when they interact and I’ve always wanted more focus on their relationship so to see that moment of hesitation from Jim, to see him even consider letting Ed go, was amazing. Naturally, he does decide to take him in but Ed has a plan up his sleeve and he arms a bomb that sits right beneath where Eduardo stands. If he moves or if Ed’s heart rate goes up or down by ten, the bomb goes off, which gives him the chance to get away. Eduardo’s face when he realises there’s going to be a puzzle to figure out was hilarious. I always forget that Ed’s ways must seem even stranger to those really far outside of the picture.

After his escape, a notice is put out for people to be on the lookout for Ed and a group of civilians talk about finding Ed and killing him. While the search continues for him, Eduardo and his men begin to bring in criminals and start clearing up the streets.

While trying to avoid capture, Ed is knocked out by a woman and her two sons who proceed to tie him to a chair and electrocute him. It turns out the woman is doing it because her dog was in Haven when it blew up. The shocks that continue bring out a memory of Oswald declaring that he’s going to fix Ed. After receiving this new information, he manages to trick those who have him hostage and escape to go and confront Oswald. I was a little disappointed that we didn’t see him try to get out of that chair considering he was still attached to it when he walked away.

When Ed gets there, he demands to know what Oswald did to him but it’s revealed that Ed was found stabbed and Hugo Strange was paid to save his life. Earlier in the episode, we see Oswald get the news that Ed was the one who bombed Haven. Even after all of their differences, it was nice to see Oswald get emotional and say “Ed, what have you done?” He seems genuinely concerned so it’s easy to believe that Oswald wasn’t the one who caused Ed to have gaps in his memory and he certainly wasn’t the one controlling him.

During this encounter at City Hall, we see Oswald confirm that Ed is his only friend left which is why he paid to save his life. The two of them make a promise that if they ever fall out again it’ll be crystal clear that they’re enemies and there will be no back-handed, hidden way about it. I was so happy that they had this agreement. It didn’t necessarily mean that all was forgiven between the two but they’re willing to be a bit more upfront with each other. However, Oswald was sneakily going to get his men to grab Ed because the GCPD wanted him. He was most likely going to use Ed as a bargaining chip again. So much for friends. Regardless, there are scenes between them in the future so perhaps they genuinely will be on the same side again. I’ll just be happy when that day arrives.

When Ed first leaves Oswald he ends up at Sirens, in front of Barbara. I’ve wanted to see the two of them interact properly again for so long and this scene did not disappoint. Luckily, Barbara chooses to believe him for now and points him in the general direction of Strange. He manages to get inside and finds out that a chip was implanted into his brain but before he can get any more information he’s knocked out with Strange planning to see what’s going on in Ed’s brain.

He resets the chip, however, before he can send Ed off on his way or do anything more to him, Jim and co show up. It was so nice to see Jim finally start to believe Ed’s claims and Strange reveals that a contract came up that he couldn’t turn down. We then discover that Eduardo and his boss, Walker, are the ones who have been controlling Ed. Jim is asked to shoot him otherwise Eduardo will shoot Jim. I was so happy to see that he couldn’t shoot Ed but I can’t believe he left him behind either, especially knowing he could be controlled.

After questioning Strange it’s revealed that a contract came up that he couldn’t turn down. We then discover that Eduardo and his boss, Walker, are the ones who have been controlling Ed. Jim is asked to shoot him otherwise Eduardo will shoot Jim. I was so happy to see that Jim couldn’t do it but I can’t believe he left him behind either, especially knowing he could be controlled. Either way, the truth is out there which means that hopefully, people will try to help Ed as opposed to taking him out for blowing up Haven. Although that being said, Ed may end up killing a lot of people in order to get to Jim thanks to his new orders and the fact that civilians want to kill him.

While all of this is happening, we also see Bruce and Selina. The latter has gone off and the former is left worried. There were a couple of things that Alfred said to Bruce when these concerns were brought up. The first is that Selina will be fine. I’m often left confused by their relationship. Alfred has been skeptical of Selina in the past and hasn’t always hidden his dislike for her but they seemed to have moved past it, however, in this episode and the last one he’s come across quite dismissive of her. I really thought he would begin to care about her quite a bit but I really don’t know at this point. The other thing he says to Bruce is that Jeremiah deserved what happened and honestly, I have to agree. We know he’s alive but I certainly wasn’t shedding any tears over Selina seemingly taking him out.

Bruce refuses to give up though and eventually finds her at Sirens where Barbara toasts Selina for killing Jeremiah. The two of them talk and Selina reveals that she never helped Bruce back in that alley when his parents were killed because she didn’t want to stick her neck out for someone else. She proclaims that that is who she was and who she still is. I don’t buy it. She’s put her neck on the line plenty for various people, Bruce included. I don’t want Gotham’s Catwoman to be coldhearted and cut off so hopefully, things work themselves out a little from here.

The end of the episode confirms that Jeremiah is still alive and he allowed for the knife to stab him for real a couple of times so it would be believable that he might be dead. After he is woken up by Ecco, the two walk through a tunnel and walk through a fireplace. There, Jeremiah is shown two people and mentions family reunions, insinuating that he has recreated Martha and Thomas Wayne, most likely the surprise he was muttering about in the last episode. I’m going to hold off on any opinions concerning this until we get the next episode but I am excited to see where Jeremiah goes from here with this plan.

Overall, I loved this episode! I think it might be my favourite of the season so far and it finally feels like we’re really getting into it. The episodes before now have been good but this was just a step above the rest, I hope this continues for the rest of the season.