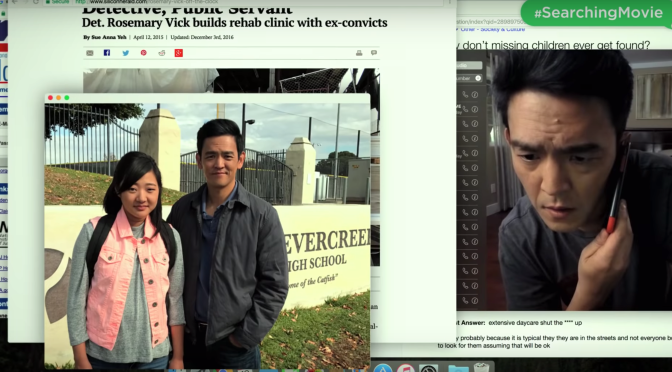 This movie deserves all the hype it got and then some. Although I knew what this movie was about I was mostly interested in the format. I wanted to see how the editing would be and if it worked for the entire thing. I’ve seen other movies with a similar format but there was something very different about Searching.

I’m not going to sit here and tell you every aspect was believable because it wasn’t, however, I loved how they worked around the idea that this all took place on a computer screen. The use of webcam footage, security footage, news footage, and so on really helped to break up the constant stream of search engines and various websites. The facetime calls (and other video chat services) also helped a lot while also allowing for the movie to have dialogue that we, the audience, could hear. The entire movie and the way it’s edited just screams talent and creativity. As someone who loves video editing, I can’t help but appreciate the amount of time and skill that went into making this movie what it is. At any moment it could have all fallen apart but it didn’t.

It wasn’t just the editing either. In a movie like Searching, it’s easy to think that the story and its characters would get left behind but they don’t. We find out an awful lot about the characters, at least enough to constantly give us the next piece of the puzzle and keep us caring about what happens to them during the search for Margot. As for the story, I personally guessed some things but that didn’t stop it from being one of the most intense experiences of my life. Towards the end, I found myself literally holding my breath as more things were unraveled and the truth about everything came to light. The pacing and structure of this story are so well done that it manages to keep you on the edge of your seat and shock you even if you guessed what’s about to happen next.

The opening sequence of Searching is like a short film in its own right. It sets the scene and gives us backstory prior to the main plot of Margot’s disappearance. I found that the opening made me feel like this movie was going to be incredibly slow paced but I was wrong. Searching gradually picks up speed as the plot progresses until you get to this point where you’re leaning forward in your seat and your shoulders are hunched up because you can’t wait to see what’s going to happen next but you’re also nowhere near prepared for it.

I’m going to admit, I do think this format could get boring if done excessively but we definitely need more movies like this. This was such an intriguing experience and I’m confident in saying that how Searching was made and the way it was edited certainly added to that.