I’m incredibly late to the game with this one but it’s been a little over two weeks since I watched Moonlight for the first time and I can’t stop thinking about it. It had been on my list to watch ever since it came out and I’m kicking myself that it took so long. I knew it was going to be good – all of the talk surrounding it as well as the awards and whatnot were telling enough – but I wasn’t expecting it to be that good. It’s impossible not to be a little in awe and I honestly don’t know if the current haze I’m living in will ever go away. Every time it seems that my brain is going to focus on someting else, I suddenly start thinking about this movie. It really is something else.

The entire thing was so raw and real but at the same time it felt almost dreamlike. It looked stunning – from the camera angles to the colours used – and it sounded just as beautiful. The acting was also fantastic and helped to take something that looked and sounded good to an entirely different level. Each actor brought something unique and special to their roles especially the three actors who played Chiron and the three actors who played Kevin. It was also great to see that almost every character – at least those that have a decent amount of screen time – were given some pretty significant depth. At the very least, every character felt deliberately used and necessary.

There was something so effortlessly beautiful about each act and how they transistioned into each other. It definitely felt like one big story but it was really interesting how each act could be seen as its own seperate thing. Each one brought something entirely different but it still felt like it all fit together. The pacing throughout was wonderful and really helped to keep the structure of the movie firm. Admittedly, the third act did lose me a little but it’s hard to tell for sure if that was the movie or the fact that I was coming up to the end of an eight hour flight when I watched it. Regardless, it’s still a firm favourite of mine and I would say that overall that Moonlight is pretty flawless. The themes of identity and sexuality that run throughout the movie are persisent and honest. They’re not always seen in a happy-go-lucky kind of way but they are always open and raw which felt entirely necessary. Don’t get me wrong, despite all of the lows within this movie following Chiron’s life, there’s also ups. It’s inspiring in a lot of ways but it also doesn’t shy away and sugarcoat everything. 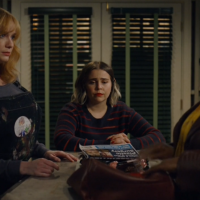