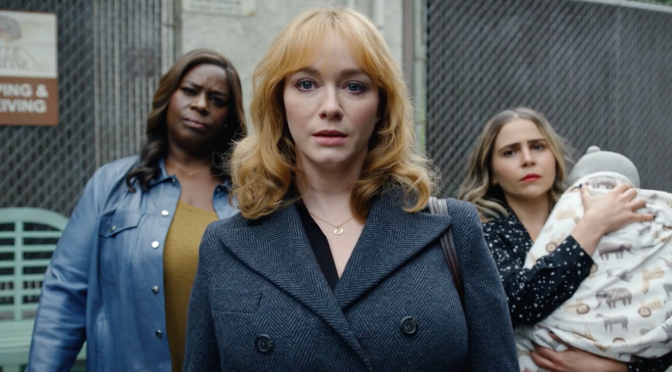 Gathering evidence for the Secret Service was never going to be easy, right? This week’s episode sees Beth finally working for them now that the hit on Rio has been called off. Wearing a wire is definitely an obvious move but there’s never actually a chance to catch anything throughout the episode. When Rio doesn’t show up to drop near the beginning and the tracker on his car goes dead, it’s yet another confirmation of his suspicions after being tasked with taking out Fitzpatrick last episode.

That suspicion gains more confirmation when Rio shows up to Beth’s house and checks her for a wire. A move that starts with a slightly startled Beth but soon, she takes back her power and determinedly strips down until she’s naked. The way she shows him he’s wrong about her wearing a wire is a bold move and one she pulls off well considering we know how scared she’s been that he’ll figure out the truth, especially when she has worn a wire for the Secret Service and plans to do so again. Of course, she would have had to strip to some degree in order to avoid suspicion but the fact she took it that far and with such a determined demeanour about her really showed her strength and how much she took back that moment after being so taken aback by him at the start of the scene.

Not that Rio’s going to give up. Throughout the episode, Beth takes on the role of “the Banker” in which she goes to different establishments and collects a bag full of money from various customers. It’s a role she’s given no prior warning about and considering the trouble she has with one of the customers, it seems Rio knew it wouldn’t be a straightforward or easy day. Not only is he pushing her to go to all of these places but as he says, things are only getting started and later in the diner, he not so subtly makes it clear that she’s essentially a fall guy. Which, if he does plan to lay low and she’s pushed more to the front (with her role as the Banker) then it does seem likely that she could take the brunt of any fall out. She might have a deal with the Secret Service right now (and she’s seemingly working with them some more next episode too) but unless she can provide evidence, there’s nothing to say they won’t take her down so they can get some kind of win.

Personally, I’d say it’s been fun to see Beth and Rio at odds and considering their history, they probably always will be to some degree but they’ve also had a history of working well together and neither of them seems eager to go to prison. It’ll be interesting to see how this whole thing goes down and who, if anyone, takes the fall with the Secret Service. There’s also the added fact that Dean is now out of prison and I don’t see him making life any easier for Beth considering there’s still a chance he could be put back inside and now, he knows about Rio’s involvement in their lives again.

While Beth is filling out her role as the Banker, Annie and Ruby are dragged along for the ride. All of the scenes with the two of them and Mick in the car were hilarious. We found out this season that he has a daughter but finding out he’s pretty good with babies when he helps take care of Dakota was a nice touch. He’s a character I never thought would have been brought to the surface more but I’m so pleased he has been. Having him back for season three was such a treat and now with season four, it’s been good to get to know him better (even if only a little).

Touching back on Dakota, the babysitting element was something I never knew I needed and I’m so glad it was included. Not only do we get to see Annie so determined to do it after Nancy and Ben doubt her capabilities but we get to see her actually try. Sure, it doesn’t go exactly to plan and Mick actually steps in for some important moments but that doesn’t stop Annie from wanting to do a good job, something that is shown when Nancy comes to pick Dakota up later. It doesn’t seem like things are completely healed over with Nancy and Annie but hopefully, the two of them can make amends at some point. It really felt like we were getting something good with them and then the truth about Annie’s affair with Greg came out. Plus, it’s always a pleasure to see Sally Pressman and Mae Whitman on screen together.

Recently we’ve seen that Annie has been struggling with growing and acceptance. Recently, she seemed to come around more to the idea of Ben no longer needing her. With how things have been going so far this season, I do hope she finds some peace and really figures everything out.

Not only is Mick involved with helping the baby but he also chimes in on Annie and Ruby’s conversations, particularly about the latter’s worries of Stan. We all know that Stan would never cheat so of course, it was heartbreaking to see Ruby even consider it, but it did make sense. Ever since he found out she’s been involved in crime (and even before), we’ve had several moments where Ruby has feared him leaving her for good or fearing she’s not good enough for him anymore. So far, the Hills always come out stronger after a setback and this time is technically no different. Eventually Ruby does confront him and it forces Stan to finally tell her about his boss. Secrets aren’t exactly rare for the Hill family these days but while sometimes it’s been rocky, Ruby and Stan have always benefited from coming clean. They work well together and it keeps them stronger to be in the loop.

That being said, I’m curious to see how far Stan will be pushed with these tasks he’s been set. Usually, what happens to characters outside of our leading ladies usually comes back to their stories in some way so now that she’s aware of what’s going on, no doubt Ruby will become involved in what’s happening with Stan but now, it’s all about how exactly and when.

Either way, I’m intrigued to watch it all unfold. All of the characters seem to be going through something and no doubt have a lot of changes ahead. Things seem to be mostly focusing on the Secret Service right now with a coupe of other storylines weaving throughout so again, it’ll be interesting to see if they combine and what that’ll look like.