The second I heard that Jodie Foster was directing this movie I knew I was going to watch it. Even before I saw any kind of trailer. I’ve been a fan of her for a long time as an actress, but I hate to see I’ve never seen something she’s directed, so that only made me want to see Money Monster more.

“Financial TV host Lee Gates and his producer Patty are put in an extreme situation when an irate investor takes over their studio.” – [imdb]

Going in I wasn’t really sure what the actual story line was going to be. All I knew was the very basics given in the description above. I’d seen one trailer and that didn’t really give away much either. Now that I’ve seen the movie I can safely say that that was the best way to go into it.

This movie has a central idea, that is executed very simply. The story line is clearly thought out, but it’s not overly complicated and it goes about showing it in a equally uncomplicated way. It gives you just enough to put two and two together, but never enough to take away any surprise, suspense, or general enjoyment. The way it’s put together is very well done.

The cast has a lot of big and popular names in it: George Clooney, Julia Roberts, and Jack O’Connell to name a few. On that front it definitely doesn’t disappoint, the acting talent is on point, and even those characters that only have maybe one scene give so much. Overall the people on screen and off do a lot to bring this movie together and each of them do it so perfectly.

This movie works. Is it flawless? Perfect? Probably not, but there was never anything major to distract me from having a great viewing experience.

For obvious reasons this movie is serious and full of suspense, but, surprisingly enough it’s funny in places. Not the side-splitting, happy kind of funny, but the kind that has you laughing in the moment as a impulse reaction. Money Monster does a great job of jumping between all the different components so that when you’ve just been laughing at something, the next moment you’re thrown into silence by something a lot more serious and intense.

Critically and technically I can’t really fault it, entertainment wise I can’t either. It was just a really enjoyable movie. I didn’t feel like I wasted any time by watching it. Everything seemed to be wrapped up by the end in some way, shape, or form. It’s greatest attribute (beside the cast and crew) was the fact that it chose not to over complicate things and create a huge show. They managed to keep it entertaining while having everything in check.

Overall this movie is memorable and a great watch. If you’ve been considering watching it then I would highly recommend you do. It was a lot of fun and I have no major complaints. 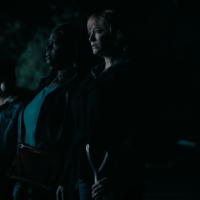